The Smithville Community began on December 3, 1836, when Chickasaw Indian Chief or sub-chief, Che-lah-cha-chubby, who also co-signed the Treaty of Pontotoc, sold Section 6, Township 12S, Range 9E to James D. Couch.  Four years later, William Smith purchased land at this site and built a log house and store.  The nearby Tombigbee River was the major transportation and communication route and the Smithville Landing made the river accessible to settlers in the area.

A trading post was established in 1820 at the location of what is now the intersection of Highway 25 and Smithville-Hatley Road.  The Town of Smithville was chartered in 1849 and a post office was opened on the site on June 8th of that year.  Smithville is one of the older towns in Monroe county. It is located on the Gaines Trace Road which was surveyed by E. P. Gaines in 1807 at the request of President Thomas Jefferson.  Gaines Trace was a major route for settlers who migrated from the northeast.

On April 27, 2011 at 3:47 P.M CDT an EF5 tornado roared up Highway 25 through Smithville, Mississippi, leaving in its wake a swath of destruction a half-mile wide and five miles long.  In seconds, this small town, with its rich heritage of faith, family and friendship, was leveled.  Most of the homes, the town hall, police station, post office, grocery store, four churches, the much prized school and all but one local businesses ceased to exist.  Its winds are estimated to have peaked at 205 miles per hour (330 km/h).[4] 16 people were killed,[5] and 40 people were injured.[4]

The community spirit, the love that Smithville’s residents have for their town, however, was not destroyed.  They responded with charity and concern for one another.  Arising from their sense of place and of history, they spent part of the next day resetting the tombstones in the town’s cemetery even as they cleared rubble from their own homes.  In the weeks that followed, community residents came forward creating a vision for Smithville’s future. 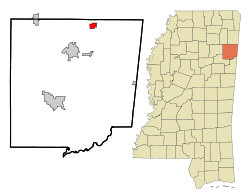